Written by Janey
Photos by Bryan MacCormack w/Left in Focus

The Freedom Bus arrived in Hebron today. Hebron is the largest city in the West Bank and as the only Palestinian city left out of the Oslo accords, it faces a uniquely brutal struggle for survival.

The beauty of this ancient city, with its old buildings and winding streets, is totally overshadowed by the lethal military presence. Menacing soldiers with guns patrol the city and cage-like checkpoints with turnstiles and body scanners are always just around the corner. The city is shrouded in tension.

Since 1997, Hebron has been divided into two areas: H1 (under Palestinian Authority control) and H2 (under Israeli control), with the Israeli army maintaining checkpoints to and from H1. The Israeli army strategically blocked off several passages around the city, making journeys that could be direct much longer, and there are large areas of the city that are inaccessible to Palestinians.

Due to violence from the army and settlers, as well as heavily restricted access to the area, more than 40% of Palestinian residencies in H1 have now been abandoned, and shops and markets have been forced to close by court order. There are now ghost streets where the biggest markets used to be. The markets that do remain open face aggression from settlers who live above them, who throw rubbish and stones down. Palestinians have put nets above the markets to collect all the debris to protect themselves from all the debris that’s thrown down. Settlers in Hebron are fervently religious and notoriously violent, known to set fire to homes and shops, as well as damage water containers. Muslim prayer calls are frequently banned for periods of time and schools are closed during Jewish holidays.

Freedom Riders travelled to Hebron today to witness its apartheid and meet the Hebron Rehabilitation Committee, who help renovate shops and preserve the cultural heritage of the city. We were told to bring our passports and ID cards, because interaction with the Israeli army was inevitable. As we passed through a checkpoint into H1, painfully a Palestinian member of the group who had forgotten his ID card had to remain behind. He later told the group how awful it felt to watch people – including international travellers – entering in and out of this part of the city, whilst he was completely locked out.

When you approach a checkpoint, you are totally at the mercy of the soldiers controlling it. You’re forced to move like cattle through a narrow, caged passage, through two turnstiles and a body scanner. Smug soldiers watch everyone coming through, and can arbitrarily demand to check IDs and refuse people entry as and when they want. Some of the group said they felt scared at the checkpoint; I felt a deep, burning sense of anger at the total power and control the Israeli army hold over Palestinians. There is no doubt this level of surveillance and humiliation, amongst everything else in the occupation, seriously impacts your sense of dignity.

We were only about 15 metres clear of the checkpoint when we turned into an empty road where two armed soldiers faced a scared 16 year old boy, with their guns half-raised. It was incredibly distressing to see, especially in Hebron. Less than a week ago, two young Palestinian men were executed by the Israeli military here. The military don’t hesitate to kill, arrest, torture and imprison children, and Palestinians present with the group today were afraid that the soldiers would shoot him. Consequently, the whole group stopped to witness the situation and stand in solidarity with the young boy who was being targeted. 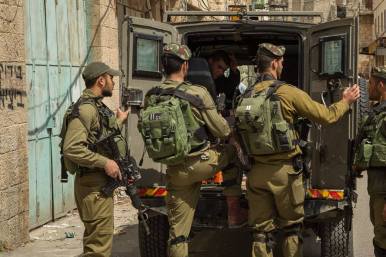 The boy was terrified. The soldiers, on the other hand, were nonchalant. This was enraging to witness, and it struck me how little it really takes for humans to be able to dehumanise others, and how the IDF as an institution must be very adept at training soldiers to dehumanise. How else could they butcher and terrorize Palestinians in the way that they do? As I witnessed the scene, I talked to a Palestinian woman about the Israeli military and we wondered how much they’re paid to do this, she concluded: “But they don’t realise, they’ve sold their humanity. No wage can be worth that”.

We stood and took photos of the situation, with the hope that this could bring some sense of accountability to the soldiers and hopefully deter them from doing harm. However, when it comes to the Israeli army, accountability is almost non-existent. There are thousands of videos online of vicious military violence against Palestinians. Regardless, in that moment on that street, bearing witness felt like all we could do; we were concerned that actively getting involved might escalate the situation.

Before long, even more armed soldiers had arrived by foot and they grouped around the boy. Eventually, a jeep turned up. The soldiers didn’t seem to care that we were there: they posed for photos, proud, and one even directly addressed the group, smirking: “Ok people, hi, how are you? Did you enjoy your time in Israel? You can move away now”. We didn’t. He declared that the army were holding the boy because “he wasn’t meant to be in this area”, and when some of the members of the Freedom Ride demanded “well why are you holding him here then? Let him go!”, the soldier never replied.

One of the Palestinians in the group asked a soldier: “What are you doing here?”

“I’m here to protect my country”.

The group’s interactions with the military proved fruitless: they arrested the boy and put him in the back of the jeep. It’s likely they then drove him to an interrogation centre, where he’ll be detained and aggressively questioned, asked to sign a statement that is written in Hebrew, then charged with a false crime that will be decided on in a corrupt military court, and then imprisoned. If the stand-off in the street wasn’t enough to completely traumatise him, the military arrest process will.

I can’t get him out of my mind – what happened to him? How does he feel? How will this impact his life?

Do his parents know he’s been arrested? What kind of terror will they feel when they find out?

Later on, Freedom Riders and local organisers debriefed on the day’s events. There was a heavy atmosphere in the room. Many of us felt sad and angry about what we had witnessed. International participants and Palestinians alike couldn’t help but cry, and a Jewish member of the group explained how livid he was that today’s violence was “being done by Jewish people in the name of the Jewish religion”. Some of us felt conflicted: we weren’t sure whether talking to the army was a good idea. We didn’t know whether our presence and actions had mitigated the violence committed against the boy, or actually made it worse. We’ll never know if he would have been killed if we weren’t there, or if he will be killed because we were there. When it comes to the Israeli occupation, it’s impossible to predict.

At the end of the debrief, which went on late into the night, one of the members of the Hebron Rehabilitation Committee said that what they see in Hebron is more than apartheid: it’s ethnic cleansing. He described the difference: apartheid forces you to take restricted routes to move forward. Ethnic cleansing stops you from passing anywhere.

As the Freedom Ride travels to different places in Palestine, we are hearing about and seeing astronomical amounts of violence at the hands of the Israelis; it’s an everyday occurrence in Palestine. Everyone has a story to tell about their own experiences: a family member who has been in prison or killed. All of these accounts are just tiny parts of an aggressive, violent system. This is how structural oppression works: individual, traumatising acts of aggression that happen on a mass-scale and serve a greater end goal. In this case, one of colonisation and ethnic cleansing. 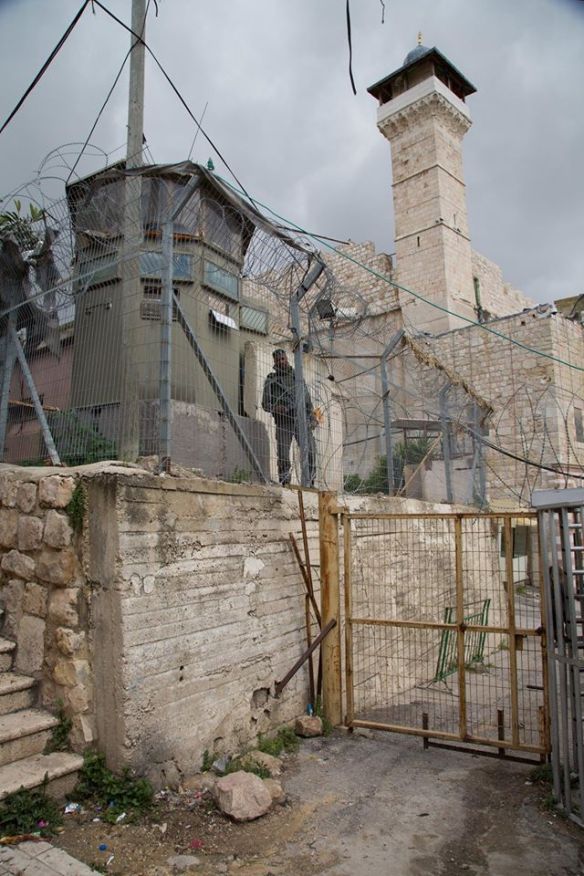