Written by Janey
Photos by Bryan MacCormack w/Left In Focus

Today we join the people of Nabi Saleh – a small Palestinian village of about 550 located in beautiful countryside 20km north of Ramallah – in their Friday protest against the occupation. Weekly protests are not unique to Nabi Saleh. Every Friday, across Palestine, villages and refugee camps protest against Israeli colonisation. 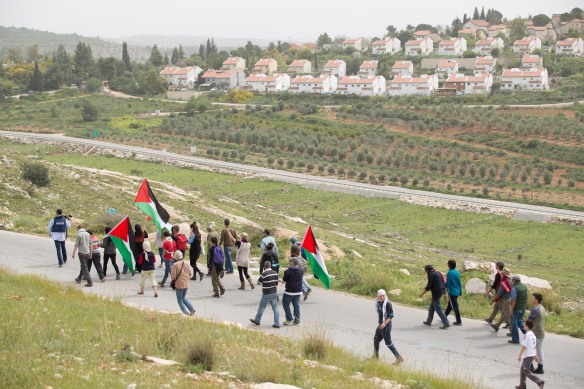 Israeli settlers appropriated the land in Nabi Saleh in 1976. Ever since, more and more of the land and its resources have been confiscated by Israel. Most recently, Israel took over the village’s spring. This is a familiar tactic of the occupation: appropriate and control Palestine’s water sources. This disrupts, deprives and destabilizes whole communities by halting agriculture and cutting off water supply to Palestinian homes. Under the control of the Israeli military, Palestinians are allowed access to the spring only 12 hours per week. Settlers have 24-hour access.

In addition, locals have been harassed, attacked and killed by Israeli soldiers and armed settlers.

Heavy anticipation and worry weighted the air on the bus to Nabi Saleh.  The groups’ experience with political demonstrations varied: some of us were seasoned protestors; some of us were completely new to it. Regardless, many of us were nervous. The Israeli army and police are hostile and act with total impunity. They don’t hesitate to use tear gas, steel-coated rubber bullets, ‘skunk guns’ (foul smelling water), tanks and live ammunition. They also don’t hesitate to arrest people – including children.

Once we arrived to the village, we met with Manal Tamini, a member of the Popular Resistance Committee. Manal asked that if we were tear-gassed, we would not run away and show our backs to the oppressors. Instead, we should run in the opposite direction of the wind for about 10 meters to escape the burning fumes, and try not to rub our eyes if the gas did reach us. We were warned that if we took cameras, they could draw attention to us.

And so, under the midday sun on a beautiful, grassy hillside, the march set off along the main road in Nabi Saleh. About 70 of us, including local children, followed Nawal – a local community activist and Manal’s sister-in-law – who waved a huge Palestinian flag, leading the group in chants: “1-2-3-4! Occupation no more! 5-6-7-8, Israel is a fascist state!”

Within minutes, a military truck was driving down the road towards us. As it slowed to a halt right before us, eight armed soldiers piled out. I was struck by how young they were: 18-year-olds covered in armor, carrying huge guns and tear gas. I won’t lie: children with guns scare me. Nawal was unfazed, though. She stood close in front of them, calling out her chants and waving her flag, and people gathered behind her. Her life and the lives of her children and family depend on this resistance; the Israeli army has already killed two of her cousins. Within minutes, the soldiers began to throw canisters onto the road that exploded with a loud noise. This startled the crowd and we split, running in different directions. Shortly after, several tear gas canisters were thrown.

The sound bombs and tear gas are “crowd dispersal” tactics. Tear gas overwhelms your senses: your throat is raw, you struggle to breathe and your eyes sting so much you can barely keep them open. All the while, you’re running. As we ran onto the grassy hillside in different directions to escape the tear gas, trampling through thistles and thorns, the truck reversed to stop between us.

As I ran, I saw an 11-year-old boy fall on his hands and knees coughing and retching. Lots of children were caught up in the tear gas, but Manal had told us earlier that it’s safer for children to come out into the streets than stay inside, as soldiers have been known to shoot tear gas directly into homes. Manal had already shown us footage of communities evacuating distressed, coughing children from second story windows. I wondered about how weekly tear gas must affect children’s lungs. I wondered about how anyone could throw tear gas at children, let alone use live ammunition.

Nawal and other locals shouted instructions to us: “run over there!”, “don’t rub your eyes!” Nawal ran among us, checking if we were okay. Crouching in long grass and behind houses, we learned that smelling wet wipes helps you breathe. Cigarettes, too – although maybe they just help to slow your breathing and give you something to focus on besides your racing heart.

Hiding from tear gas, I met Adaya, a young Israeli social worker who has been joining the protests with her friends for two months. She told me, “If the soldiers leave first, we win. If we leave first, they win”.

Once we had recovered from the first round of tear gas, many of us re-grouped to the road, and children remained on the hillside above, gathering stones to throw at the soldiers. In response, the army released several more rounds of tear gas and used a hand-held cannon to launch them from 50m away. Soon the whole hillside was covered in tear gas fumes, spreading with the wind. I found myself kneeling in the grass next to an olive sapling and an empty tear gas canister, a striking image of Israel’s violent assault on Palestinian land. 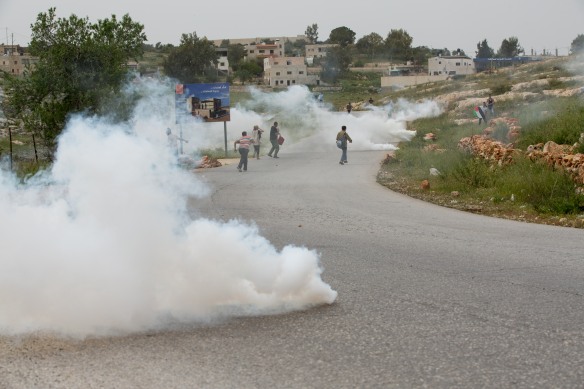 Before long, the soldiers began to retreat down the hill. Children followed them, using slingshots to throw rocks. Eventually, the army left.

Overwhelmed by the aggression we had witnessed, we returned to Manal’s home. She told us how she had recently been released from prison on false charges, explaining that this is common. The Israeli authorities do all they can to grind Palestinians down, including fabricating crimes that people have committed, even children, and demanding large bail payments.

After the demonstration and an incredible lunch that Manal cooked for us, I spoke to her about the day and what international solidarity means to her. She told me she thinks the Freedom Riders were amazing, and that she had been touched when she saw tears in people’s eyes (not just because of the gas), because it showed that we truly understood their struggle. She also told me that the Freedom Riders were a welcome relief in comparison to people who travel to Palestine as “war tourists, ” attending demonstrations to take photos or “experience a live action movie,” the kind of people who also have a habit of criticising Palestinian protest tactics.

In Nabi Saleh, we experienced a tiny dose of what the Israeli authorities are capable of. However, my main learning from the day is that solidarity is twofold:

1)     Showing up on the ground, sharing risk and taking direction from the people who are at the forefront of struggle, and not criticising or questioning their decisions.

2)     Returning back to our countries as witnesses of the violence and advocate for Palestine.

This is exactly what the Freedom Ride facilitates, and I’m glad to be part of it.

Before I left to get back on the bus to Bethlehem, I found Adaya to say goodbye: “We won, for today! Maybe even just until tonight. But we will keep winning like this until the occupation is over.” 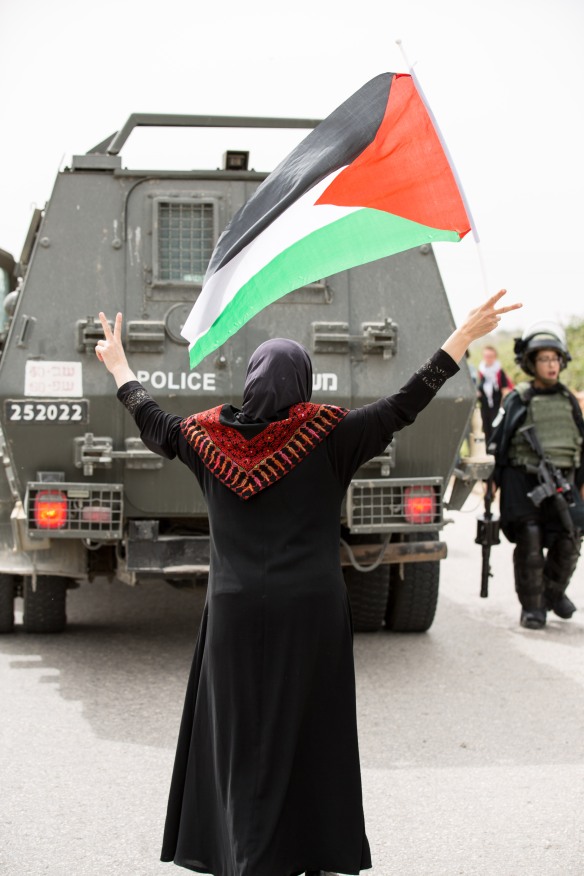 1 thought on “Day 5 – Struggle and Solidarity: the Friday Demonstration in Nabi Saleh”