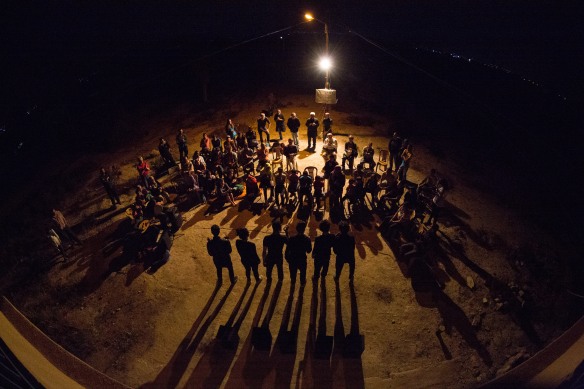 Last night we learned that the countryside is not as quiet as we expected it to be. A whole symphony of animal voices lulled us to non-sleep: dogs, cats, chicken, donkeys, birds and last but not least, mosquitos took part in the concert. And the beautiful full moon shined upon us women sleeping in the open on the terrace.

In the morning, we split in two groups; one staying in Fasayel painting the community house together with the children of the village, the other group driving back to Yerza village to help rebuild the community center.

Reconstruction as Solidarity and Resistance

On the way to Yerza the Freedom Bus got two flat tires. There was only one spare and it was clearly Palestinian, as it maintained steadfastness through the rocky roads of the mountains until we were able to buy a second.

The Yerza community center has been destroyed by the Israeli Occupation Forces (IOF) several times. Each time the village has rebuilt it.

A villager told us that the IOF fly over the area regularly. When they see something new has been built they will come with bulldozers and destroy it.

International support has at times been counterproductive, as it attracts even more attention. Yet, rebuilding something that will likely be destroyed once again is one form of resistance and an example of Palestinian steadfastness.

We then began throwing aside the smaller stones that lied on the ground. Then one of Naeem’s sons brought a pickaxe to take off the bigger rocks that were stuck in the ground.

One of these rocks was particularly big and went deep into the earth. Observers gathered around the rock and everyone in turns gave a hand; men and women, the Hafez family, Freedom Riders, The Freedom Theatre actors and neighbours that had now arrived.

It’s something that happened spontaneously: everyone wanted to give a hand and with the help of all, the rock was moved. 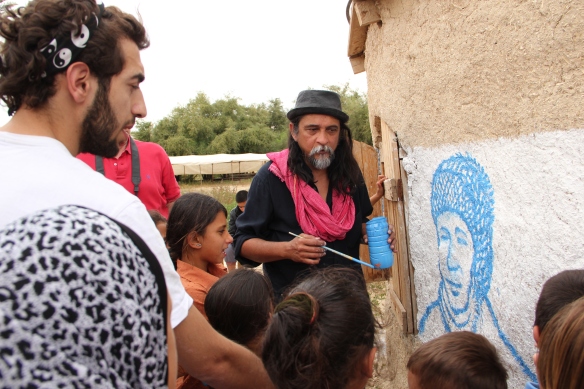 Local children released from their morning school session joined us to put their energy into decorating the outside wall of the community centre.

Freedom Riders, Orijit Sen – a graphic artist from Delhi, and London-based cartoonist and teacher Tim Sanders were on hand to guide the mural painting. Osama from The Freedom Theatre interpreted and facilitated interaction with the kids.

Orijit and Tim had given the work a start and asked the children to paint familiar shapes and figures.

After a few minutes the children were brightly painted and the walls portrayed the energy that had been expended.

Reflecting on the work, Orijit said, “I am very glad we got this opportunity to do something with the children. It was an unexpected event and very exciting. The children were energised and probably frustrated by a childhood under occupation. This comes out in the way they express themselves. That’s what matters. It’s not about good and bad, but an honest expression.”

The mural we collectively achieved is very striking. The local cockerel enjoys pride of place on one of the panels; unsurprising to anyone who has been here. 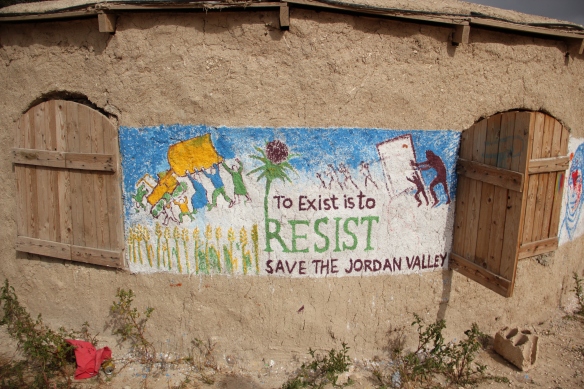 On another panel the children created an explosion of energy. The mural is memorable, much like our visit.

At night the people of Fasayel came together with Freedom Riders for three theatre performances. The first was Platform, about a Palestinian-American coming back to Palestine for the first time. Facing the oppression of the occupation and embracing his people’s culture deepened his connection and understanding to the land of Palestine.

Following Platform came a performance of a short Hindi-language play called Yeh Bhi Hinsa Hai (The Faces of Violence) by Jana Natya Manch (or Janam for short). Earlier in the day, Janam had performed for a group of women in Fasayel. They were thrilled that the women embraced the play and led an engaging discussion amongst themselves. “It was one of our most memorable performances,” said Janam member Sudhanva Deshpande, “I will carry it with me for quite some time.” To end the evening, students from The Freedom Theatre School performed Playback Theatre. An elder man in the village told a story about his family being unable to buy a wedding dress for their soon to be daughter in law. The Israeli Occupation Forces refused to let half of them through checkpoint leading to the markets of Nablus. The family tried another checkpoint and were also denied entry. The bride realised they would have to buy the dress from elsewhere. This deeply saddened her because she knew the dress would not be the same quality.

Another audience member from a refugee camp in Bethlehem told a story about his mother’s role in the resistance during the second intifada. In her home she had a window with bars over it. When the IOF invaded the camp to capture freedom fighters, she would remove the bars allowing fighters to come in and hide. When the IOF arrived to raid her house the fighters would climb back out the window. She then let the soldiers in and continued cooking as if nothing was happening. The IOF never found the fighters.